Lightning rarely destroys a home but the average insurance claim is US$4,324

It’s beautiful and alluring. It can also be devastating. According to the U.S.-based Insurance Institute, lightning strikes rarely destroy a home, but they can cause quite a bit of damage. In 2009, the average homeowner insurance claim damage, due to lightning was US$4,324. But add up and those claims and insurance companies paid out almost US$1.1-billion in claims due to damage caused by lightning strikes.

Yet, we underestimate the need to prevent lightning from hitting our homes. “The great majority of claims we receive in Canada are from electrical surges,” explained John Lockwood, president and CEO of Peel Mutual Insurance Company in Brampton, Ont. during a CITopBroker.com interview. “The actual damage to the structure is usually inconsequential, except when it starts a fire. Most residences aren’t going to go to the trouble of putting up an electrical rod or ground system—it’s too expensive, it’s not aesthetically pleasing and the chances of [lightning destroying a home] are pretty remote. I don’t see dwellings taking that extra step.”

Given that the best defence against strikes will seem an unnecessary expense to most homeowners, Lockwood says that there’s not much they can do to protect their homes. “What you can do is try to minimize the damage.”

One effective way is to install surge protectors. 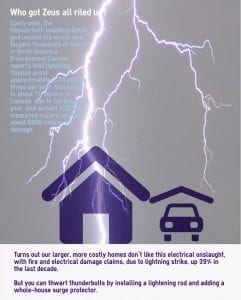